The past couple of years I've managed to get away to Florida. Mostly this is to get away from the cold in New York, and to practice my other expensive hobby: scuba diving. I came down this weekend with a friend and, for the first time, paddled a proper sea kayak in Florida.

I've been staying at a small place in Key Largo. About a block away is a kayak shop that rents deck boats (sea kayaks). On the map above, we're about halfway down the lower right reverse "C" that runs along the highway. I rented a boat, once with a friend and once on my own, to paddle east a bit across Blackwater Sound, then south through the first channel into the mangroves and into Tarpon Bay.

Both days there were steady winds, in the 15-20 mph range. This created a lot of wind waves on the sound itself, which while fun to play in were more than a little work. Once in the mangrove channel however, we were sheltered a bit from the wind, and had to content only with passing motorboats  and the fishermen they carried.

What we weren't protected from were critters. My friend SS saw something, probably a manatee, that startled the bezeezus out of her. We later took a turn into some more narrow mangrove channels and saw some ginormous pelicans. Our biggest start came from a cormorant emerging from below the water, silhouetted against the bright open background like the Loch Ness Monster. We then took a look at the wind effect on Tarpon Basin and decided to turn around, catching some current back and saving our energy to fight the wind.

The next day, after she had left and one of my diving trips had been cancelled, I went out again, on my own. This time, rather than stay near the shore, I paddled out into the sound, taking wind and 1 foot waves abeam and practicing landmark navigation. At sea, without well defined landmarks, the shore blends together into a single depth of field - what looks like a long unbroken line may turn out to be a point or headland jutting out a mile or two in front of a more distant shore. Using my chart, compass, and starting point as references, I decided a course to take me to a point that lined up with the channel, and that worked out well. I took following seas into the channel.

This time, I took a different route than I had with SS, following the markers for bigger boats as far as I could. I considered going in to the next basin - Little Buttonwood - but the wind had picked up and I wasn't sure how much it would slow me on the return. I took a stab navigating back through the mangroves, but after about my third major turn, I was no longer sure I wasn't in a dead end, and I backed out and returned the way I came.

Back out on the sound, the wind was stronger than when I left it coming mostly from the NNW. I thought that might push me against the southern shore of the sound, so I opted to essentially ferry against the wind. I picked a radio tower in the distance a bit north of what I thought was my destination, and paddled towards it, keeping the wind at about a 30 degree angle to port. In this manner I found the wind slowly blew me towards the eastern shore as I paddled north. As I got closer I realized my destination was not quite as far up as I'd thought, and I paddled due east the last half mile or so.

After that, I practiced skills: braces, edging, rolling, hanging draws. I put on quite a show for the locals at waterfront bars to either side of the shop. The water here is much saltier than the Hudson. After that, I hopped out, talked shop with the local staff, and went on home to clean up for dinner.

I would love to come down here and paddle a proper journey at sea. Perhaps one day I will.
Posted by jkmccoy at 5:58 AM No comments:

Holy cow, has it really been nearly two months since I blogged about kayaking?

But I've been paddling, I would say. I've been to pool programs, played polo.

I suppose I haven't felt like anything has been blog-worthy. If you want to keep up with Kayak Cowgirl, be sure to look her up on Facebook and Twitter.

After my last paddle on the Hudson, the ice overtook the river for about six weeks. New York City and the surrounding area were hammered with blow after blow of sub-freezing cold waves. The city was encased in ice, and ice flowed down the river from further north. The New York Times had a little video about a hardworking icebreaker farther north on the Hudson. Heck, even just getting to her day job, the Cowgirl found herself slipping downhill backwards on the iciest of days. 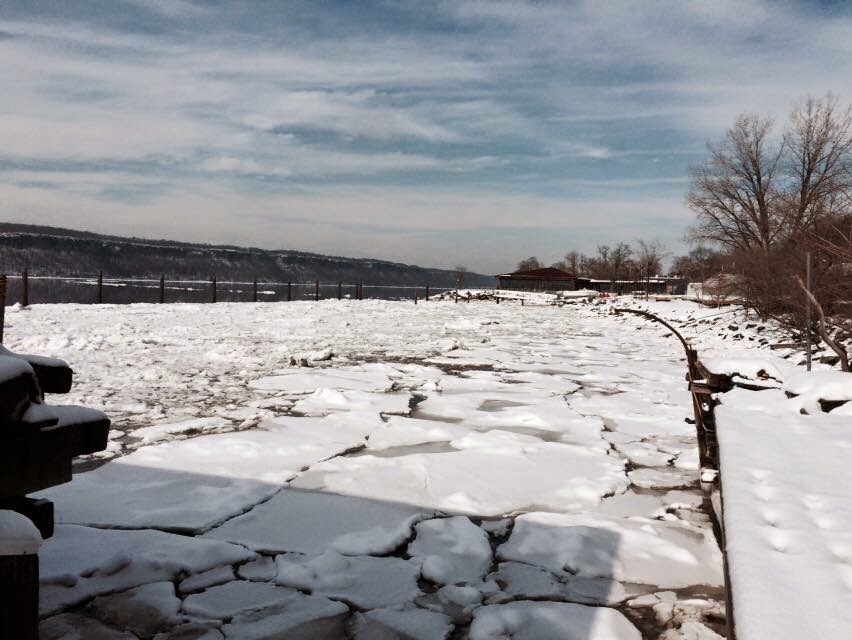 
All that started to clear up by the third week of March, but while the days got warmer and prettier, there was still a lot of wind out. And, by then, I'd been to enough pool programs to make some progress in skills that would have just been uncomfortable on the river.

For a while I did Kayak Polo. That was amazing, and if you want the full picture, look back at some earlier posts. Sadly, that came to a premature end the very day a fun tourney was organized. Enough people signed up ahead of time that everyone was organized into teams and we'd have a little playoff. Unfortunately, something happened to the physical plant of the pool building, and the season was cut short indefinitely.

After that, I'd go to Riverbank State Park, a program run by a collective of people from different clubs. Not far from where I live, Riverbank State Park is a large water treatment facility with a sports complex built on top of it - including an indoor pool. In exchange for offering the occasional lesson, your fried the Kayak Cowgirl got a sheltered space to work on her roll and certain rescue techniques. That less-consistent (well, less reliable) side has improved nicely.

So that's been the winter. Hopefully the work of it is over and, with Easter coming right up, the real start of spring will begin, and we'll be back to our regular scheduled programming of adventure and instruction and just plain how-do-you-do observations of paddling life in New York City.
Posted by jkmccoy at 5:28 AM No comments: