A Day at Democrat Point

How ridiculous must I look? Surely I look ridiculous.

After about the fourth passing motorboat asked me and my companion if we needed help, I though perhaps the orange helmet I was wearing in perfectly safe waters belied the notion that we were OK.

This was how we wound down our day at Democrat Point, Long Island. 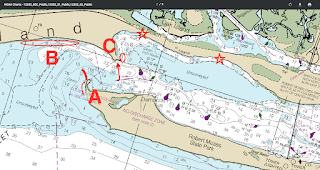 We started off parking at one of the starred locations on the chart. At the start of the ebb, we had an easy time heading out. The "unsurveyed" area was very light on current, and had a big sandbar; we spotted a horseshoe crab swimming as we paddled out, and my companion spotted a spider crab as well. Near the channel, dozens of boats of various sizes, from little motorboats to multi-decked charter fishing boats, plied waters. The current's eddy line was noticeable, and after riding it to the narrowest point, we crossed and checked out the entrance to the inlet.


The water was bouncy, and in short order, a messy tiderace formed, ocean swell running into shallow water, against current. Over the course of the day, it would change shape as the ebb tide strengthened and the water level dropped. We only played for an hour or so, removing ourselves by the time the tide got close to two knots. Also, following a capsize and recovery, snack time was called.

While ashore we talked about how to control the boat on waves, especially in broach, and taking waves abeam. We also talked about how to take a range, or a transit, and after that, used that new bit of knowledge to cross the channel to the north, and found a lengthy beach to play along.

After that, we paddled eastward, eventually taking a break in a little nook that was shallow enough for standing but deep enough for rolling, and V (my aforementioned companion) got in some rolls. I did as well, practicing how to distinguish different parts of a roll. I even tried showing a roll without a boat, which is harder than it looks, but not as hard as it sounds.

We found a mini-tiderace nearby, with a small eddy, and that's where we decided to try some "rough water rescues". The water was moving, and the waves were big enough to require proper support, so the rescuer couldn't slack off on holding the boat. All that aside, this was near the approach the  motorboaters were taking to a mooring field, and it's at this point that people stopped and asked, repeatedly, for help. No one asked when we were about to be swept into the terrible maw of the open sea. But, with a friendly wave, we convinced everyone that we were fine. Trust me, I'm a professional.

Which brings me to the helmet. I'd carried it on my back deck, only wearing it for the surf session. Yet, when we were doing rescues, I wanted to keep it clear, and the easy solution was to put it on my head.

We finished the day paddling along the shore, avoiding the shallow area that had now become a wading place for birds and people clamming. We took a find shot at various rolls, hand rolls and offside rolls, before packing it all up and driving home.

Democrat Point is a bit of a drive from our usual area of operation, but it was well worth it. There are a variety of features to play with. It's not for beginners, but with a bit of planning, it offers a variety of learning activities.

Posted by jkmccoy at 1:19 PM No comments: