A friend of mine passed along a good deal on a whitewater boat recently, including matching spraydeck and a one-piece paddle, slightly feathered. I had to drive a bit out of my way to pick it up, and suffered a biblical deluge of rain on the way home, but I did get the boat, a Liquid Logic Remix 59.

I've only done white water paddling a couple of times. The first, a few years ago, when I was first starting to paddle a bit more seriously and learned a friend at work was into kayaking - but only whitewater. He invited me along to do a stretch of the Lehigh near Jim Thorpe, with a class he was assisting with, and it was eye-opening.

Moderately Terrifying is the way I would have put it at the time. I paddled like a sea kayaking - charging through and over waves, trying hard to resist the instinct the edge to the outside of turns, rather than to edge downstream. In whitewater, always edge downstream.

A couple of years ago I started dating a paddler, one who does whitewater, and in short order learned we had mutual friends, including two women who paddle whitewater canoe. So, once again in a borrowed boat, I paddled part of the upper Delaware river, this time with a few more years overall paddling experience, including some time in big, dynamic water.

The very weekend I bought the Remix, my friend LB was taking another group down that same stretch of water on the Delaware. As white water goes, it's pretty easy, with a couple of interesting pieces, but mostly just a steady flow of water to practice boat control in. We drove up past Port Jervis and lower the boats to the water's edge, and in short order, we were off. 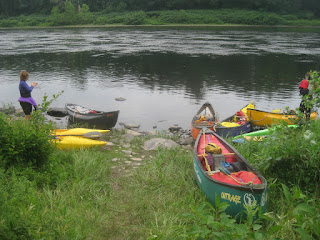 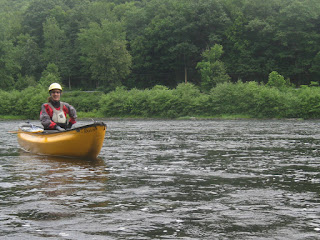 But parts of it get a little perky. 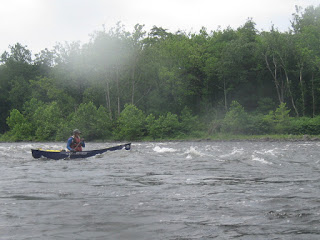 As we proceeded, we stopped and played around various rocks and wave trains. There is a spot that has a drop with a funnel next to it, and we practiced eddy work there.

Further down, there's the "Mongaup Wave", where the Mongaup river roars in almost perpendicular to the Delaware, and rather steeply, with a tall cliffside opposite. Where the waters converge is a long and strong wave train, with narrow eddies along the side. We played there for a bit. The Remix surfed well against the waves, but it was hard to attain against them.

We did have one mishap, easily recovered. One of the newer paddlers lost her balance against a rock and fell in, but was easily recovered in the next eddy. While that was going on, LB and I took turns surfing a small wave a little ways down. 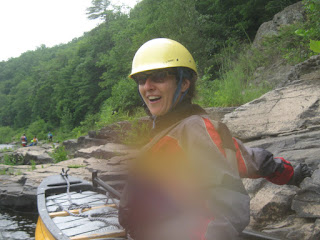 At the end, we were supposed to rendezvous with a group that had done the Mongaup run, but there was some confusion about where to meet. They're suppose to come here, each group thought, at their respective take-outs. Eventually two emissaries from the other group arrived, right as we were about to head to them.

The Remix is a fun boat to paddle. I even took a roll in it at the end - not as graceful in a sea kayak, but do-able. I need to practice more. It's super-stable and very snug. The spraydeck is a bit tight, but hopefully it will stretch out a bit the more I use it.