I recently paddled with some members of my club to Mitsuwa market, in Edgewater, NJ. It's a popular mid-range destination for our club, about four nautical miles each way. Timing with the tidal currents makes it a pretty easy trip. The trick was, this was in winter, December, a day after a significant snowfall.

I've mentioned it before, paddling there solo a couple of years ago. 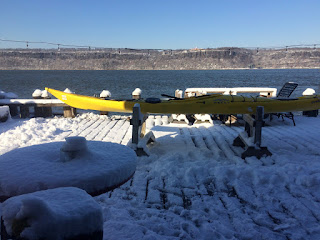 With temperatures in the 30s F, water about 50 F, everyone was wearing drysuits. At least one member was wearing one for the first time in actual conditions, and a couple others were relatively new to drysuit and cold water paddling. The wind prediction was on the high side - broaching F4 from the west - but turned out to be milder, and more from the south. 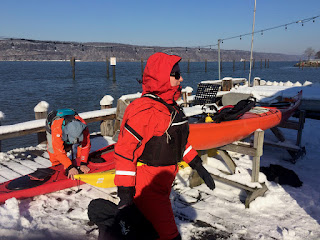 Shuffling to and fro. 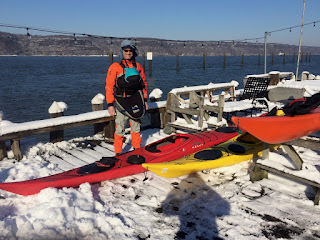 We also had sunshine on most of the journey, so after layering up to meet the predicted wind chill, several of us found ourselves warm, in some cases overheating.

While we'd had several inches of snowfall the day before - incidentally, something I drove in briefly, making the rounds of various holiday parties - some was still on our deck, but mostly it had melted. We had "movie snow" decorating the cliffs and trees, but otherwise the water was indistinguishable from any other day of paddling. 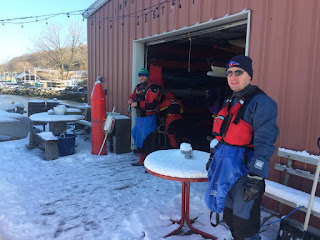 We did spot snow falling off the George Washington Bridge, as it was plowed off, way up high. We could see it streaming in heaps to the water below. That was kinda neat.

Five of us set out. Along the way, we met up with AA, another club member who'd been supporting a swimmer out for a photo shoot. That is, someone swimming in the water, without anyof our fancy thermal protection, near the Little Red Lighthouse, for about half an hour, just for the sake of some photographs. We were amazed. AA came over and said hello, but opted not to join us - he'd worked late the night before, and went back to get some shuteye.

We proceeded, and I found my first navigational challenge. This trip is easy enough to handrail, but one of my favorite marks is no longer in place: the Ferryboat Binghamton, a historic ferry later turned floating restaurant, abandoned years ago and long since demolished by hurricanes Irene and Sandy. Last summer, plans were finally executed to remove the old lady from her mooring, so I took a few minutes to figure out where we needed to go - past that wharf, or farther and around that long pipeline pier? It was the pipeline pier. 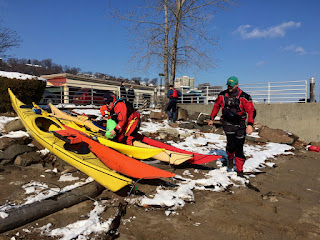 Our landing at the beach. 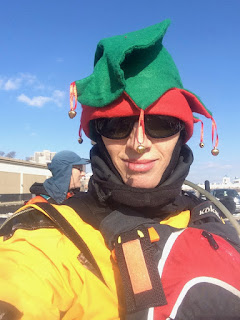 We landed and secured our boats, then went into the market. I had a hot pork and noodle soup. 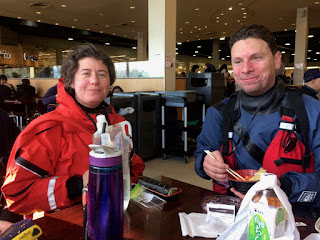 After about an hour, it was time to return. We took in a good view of Manhattan across the way. 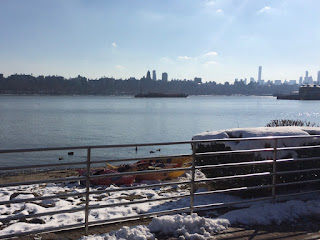 From parking lot to Manhattan.

It was a great trip. If you want to see the on-water portions, check out my video with a lil' holiday music set to it.

A Race with Improvers

I taught a fun class near the end of September, taking students down to a little tiderace that forms under the George Washington Bridge, right here in Manhattan.

I called this an an improvers class, as everyone had some experience sea kayaking, but wanted to develop their skills a bit. The tiderace was just a bonus feature to practice against.

First, we practiced near Dyckman street, in the last bits of ebb tide, working out the fiddly bits. 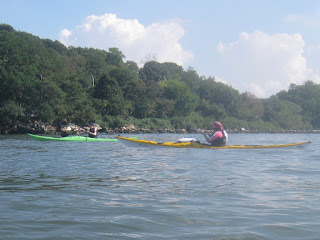 A wee bit of practice.

Then, we headed south, towards to bridge. 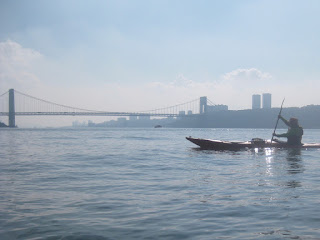 I've mentioned the GWB tiderace before. In a post from last year, I described it a bit of a trip Kayak Dov and I took.

At the start of the flood cycle near the bridge, a wider body of water starts flowing past Jeffrey Hook, where the Little Red Lighthouse sits. Furthermore, if you look on a chart, it's clear that the hydography has a steep, banked curved in the long bay south of the bridge. The effect is that a large volume of water gets squeezed and accelerated at the hook, and the surface water piles up and back over itself. As these waves form, they appear to fall, bizaarely, back towards to flood current. As the effect builds you can actually surf upstream, and if some sizable wake arrives from, say, a passing barge, you can ride some dumpy waves in excess of 1m in height. It can be quite exciting.

For these students, it was a safe, low-consequence environment to gain confidence in somewhat rough water. What I like about the area for instruction purposes is two fold. First, there's a sizable eddy just north of the hook, making for a safe spot to retreat to or observe from, as well as a "ski lift" effect to make multiple runs practicing peelouts. Additionally, since it's a flood current, in the worst case, swimmers and boats and kit will all float back towards where we started. 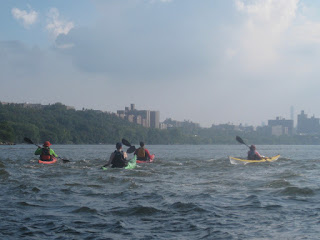 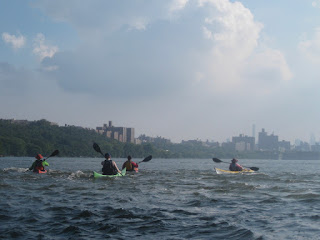 We did have one rescue. Towards the end of the session, we did get a bit of wake that vaulted the wave heights to 1-2 feet from behind us. I shouted a heads up to my students, reminding them to keep momentum and either ride the wave or let it pass under. One was indecisive, and capsized. I was able to recover him, and called the rest over to the eddy. As a group we decided to end the tiderace portion of the session and practice rescues, with the current carrying us back to our starting position. 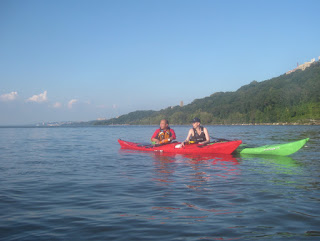 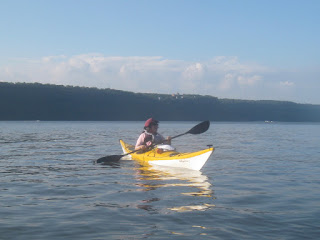 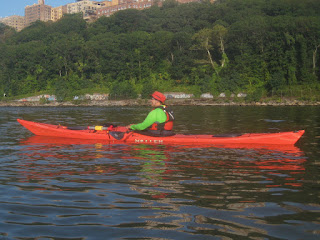 I really enjoyed this session, and was happy to have a sizable group for instruction. It's an area I am constantly learning more about, and having a group of students with different goals and abilities pushed me to develop my coaching ability - focusing on one or two things at a time for each participant.

At the end of the day, we were treated to a weather system moving in, some potential precipitation crowding out our sunny day. 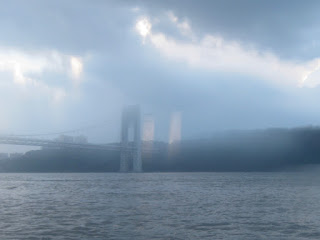 Farewell to the Bridge.

I hope to do this again next year - maybe more than once.
Posted by jkmccoy at 10:12 AM No comments: