Camping in Gateway 1 of 3: Journey to Staten Island

This past Labor Day weekend I fulfilled a dream I've had for quite a while. Well, most of the dream. I kayak-camped with some friends in Gateway Recreation Area, a set of National Parks spread across the lower harbor of New York City.

There are three major pieces, each on Federal property that was, at various points in history, military in nature. On the easternmost point of Staten Island, just below the Verrazano Bridge, is Fort Wadsworth; in Jamaica Bay, at Bennet Field, is a set of runways that played host to the golden age of aviation before becoming a Naval Air Station; at Sandy Hook, a narrow spit pointing up into the harbor, is a former Coast Guard station, used in the distant past to defend the harbor, and during the Cold War as a missile defense station. Each site has campgrounds and facilities, with reasonable portages to the water.

My dream is to paddle there from my "home" boathouse in Inwood, Manhattan. However, that is a long trip (at least thirty miles to Jamaica Bay, twenty or so just to Staten Island), and it's difficult to find the right combination of time off, people who are capable, available, and fun to paddle with, not to mention cooperative weather. So we cheated: we cartopped our boats out to Bennet Field Saturday,  camped and paddled, then made the journey to Staten Island, where we camped and returned the next day.

My companions were EY, DR, and MM. EY and DY are mutual friends from the Appalachian Mountain Club, under whose umbrella I've taught out at Fire Island. Their experience is more on the whitewater side - EY is an amazing whitewater canoeist, and recently paddled the Colorado river in an expedition. MM is a new acquaintance, whom I met taking an instructor course this summer, and with whom I went to the Paddle for a Cure event; she's also an avid surfer (with boards) and knows the lower harbor pretty well.

We were really fortunate with the weather. The entire weekend was predicted to be sunny in the 80s F, with just a few clouds Sunday, and winds no more than 8 mph, except Monday when we had winds up to 10 with gusts to 20.

As with most of these trips, we ran a little late getting there, but were able to set up camp and go for a little trip on Jamaica Bay itself. Jamaica Bay is a large, shallow wetland, with a few channels running through it. 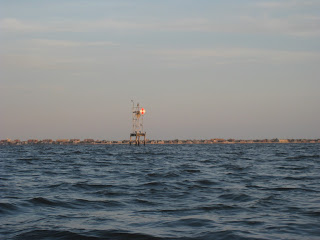 Bennet Field is a surreal place. In the distance, we could make out lower Manhattan. After a lengthy drive along the Brooklyn-Queens Expressway and then down Flatbush Avenue, we entered the grounds past unmanned guard posts, then drove up long streets to the visitor's center, which was the original control center, a squat Art Deco building overlooking a giant parking lot. After checking in, we drove down a long taxiway to the campsites - Wiley Post A and B, which were no more than extended yards of grass and trees a two minute drive from the water.

Over cracked asphalt we could make out the Bay, Queens, Brooklyn, even Manhattan, and Coney Island. On the far side of the bay was JFK airport, its tower an easy landmark. 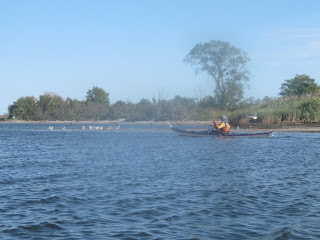 We paddled east from an old seaplane launch, past Ruffle Bar, along a channel until we turned north-ish to the Cross Bay Boulevard bridge, and then westward with the current, around Canarsie Pol and back to our destination. It was dusk when we got back, and two rushed ahead to start dinner. We had some roast chicken, salad, rice, and s'mores. EY and DR turned in early, having been up late for work the night before. MM and I walked out to a wide spot and tried to spot planets, stars, and constellations - all while the NYPD took off and landed their helicopters at their base nearby.

The next morning, we packed up everything: tents, pads, sleeping bags, cooking stoves, food, clothes - into our boats and launched off the beach by the seaplane launch. This would be our first full day at sea! 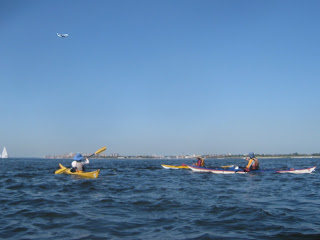 Heading out of Rockaway Inlet. 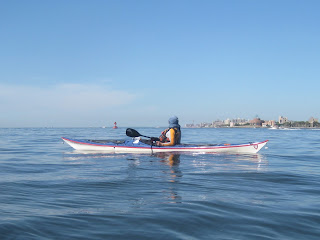 I'd charted a course to take advantage of the current. One of the challenges is that the water is coming in to Jamaica Bay at a time when you need to leave to be in the right place for it to help carry in to the harbor. So, the first hour and a half was spent paddling against a small but growing amount of current, as we left the bay and headed out of Rockaway Inlet. 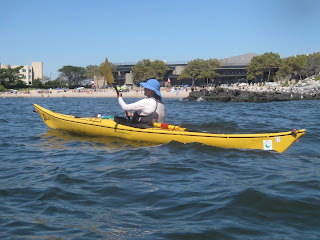 Onwards we paddled, on a beautiful early September morning. 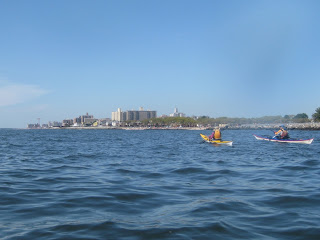 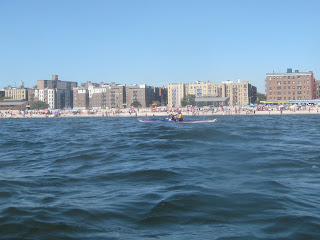 We took a short snack break before passing by Coney Island. All along the way we stayed out from the swim beaches, though occasionally we found an intrepid swimmer out near us. Generally we were able to find a lifeguard on a surfboard and go about 40 yards out farther. Private beaches, public beaches - we passed several.

All along the way, the Parachute Jump at Coney Island was our main landmark. This was a little nostalgic for me because when I first moved to NYC eighteen years ago, I lived on Ocean Parkway, much closer to Coney than to Manhattan, and in my first few summers it was easier to head to the beach than into the city. Quite a bit has changed, but the landmarks, for the most part, have not. 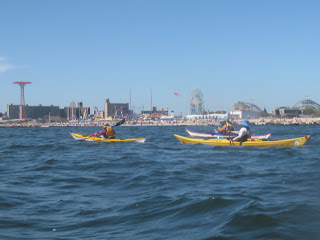 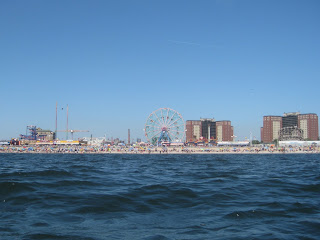 We stopped for lunch shortly after passing the pier at Coney Island. This is not the pier I remember from when I lived here - this was modern, concrete and steel, not a rickety old wooden contraption. It was still filled with fishermen though.

By this point we were catching a little current carrying us westward - which meant that we were gaining ground while we ate. That was a welcome relief. The idea was, we would head to Norton Point, then turn north with the current, paddle up along Gravesend Bay, and look for a good time to cross the Ambrose Channel - the major shipping channel used by cruise ships, container ships, ferries, and barges. 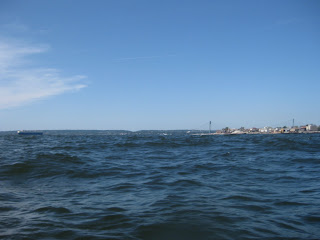 Norton Point and Verazzano in sight.

Norton Point can be a bit bouncy, as the current makes a relatively sharp turn and the depth changes. We surfed through some fun little waves and began looking for markers - Norton Point Light, and some private yellow buoys in the bay.

Towards the north end of the bay we moved towards a yellow buoy and looked both waves. We also listened to channel 13 for announcements of outbound traffic. Nothing was on the horizon. There weren't any good markers to line up a transit, so I decided we would just head straight at Staten Island, knowing the current would carry us north about a quarter-mile.

"Ready, let's go!" We set out, moving steadily, until we were well westward of the nearest channel marker I could make, a green buoy about half a mile south of us. The water was shallow, and the incoming current was forming little baby surf waves.

Most of our group simply surfed right in. I decided to try, "landing in surf", backpaddling on the receding water to get momentum against the next wave coming in. This failed miserably. I was off-angle and got pushed in at a quarter, skidding in to the beach like a bad car racing movie. Better luck next time.

Once landed, one of our group walked to the registration office, which turned out to be over a mile away. Meantime, the rest of us unpacked, scoped out the campgrounds (which were only three hundred feet away), and used the facilities. Once MM came back, we moved our gear up, and later our boats. EY stowed hers on her truck - she had to do some work on Monday, so she'd staged her truck ahead of time. 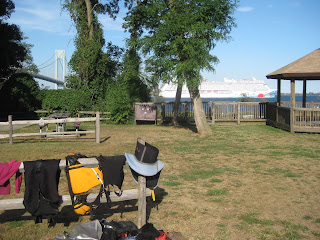 We were immediately south of the Verazzano Bridge, looking directly out over the Narrows to Brooklyn. This led to the surreal site above - the Norwegian Breakaway, a "cruise to nowhere", music blaring, en route to party at sea. Mind you this ship is three times the size of the Titanic, one of the ten largest cruise ships in service today, and the largest such ship to operate out of the Port of New York. 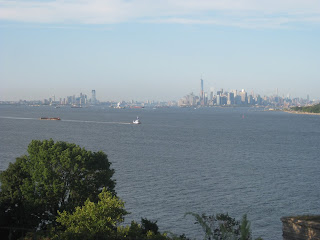 View of the Harbor.

Once we had the camp set up, we took a little walk to enjoy Fort Wadsworth. I'll give more detail in a separate post on the sights we saw, but suffice it to say, Fort Wadsworth has defended NYC for centuries, and has a lot of amazing history to it.

Also, goats. More about that later. 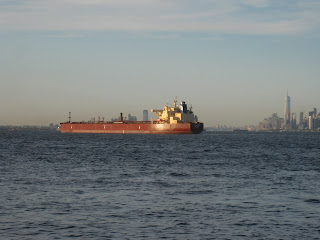 Lower on the ground, we saw more large vessels entering and exiting the harbor. 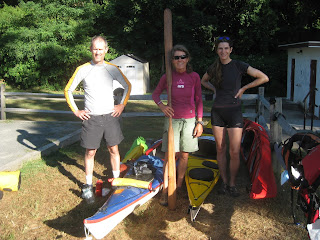 Once EY left, the three of us were left to cook and share stories and enjoy the view. One curious outcome was that all three of us were paddling Valley boats. If you're a Valley fan, here's three boats in progressively smaller sizes: the Argonaut, An LV Avocet, and a Gemini SP.

Posted by jkmccoy at 7:11 PM No comments: