A Beautiful Day. That was the phrase nearly everyone I ran into said as I considered where I would paddle. People at the boathouse, coming in from their own trips, all said that, and eve non-paddlers on my flight path the the boathouse said the same thing.

When Mister Cowgirl and I drove up to Maine a week earlier, we thought the drive was pretty but that more was to come. Sure enough, by November 4, the trees across the river on the Palisades had exploding with autumnal color.

For years, I admired long trips. Anything less than 8 miles or four hours was "boring". With the tidal currents around New York City, it's easy to cover over a dozen miles in just a couple of hours, timed just right. Paddling out to the Throgs Neck and back (just under thirty miles round trip) or from Manhattan to Sandy Hook and back (about thirty-nine miles)? No problem - that's the goal. Getting kitted out for much less than that is. . . well, is it worthwhile?

This particular day, I was faced with a conundrum. I only had a couple of hours available, and the current would be ebbing all morning. I didn't want to journey too far south, but didn't want to be out late. 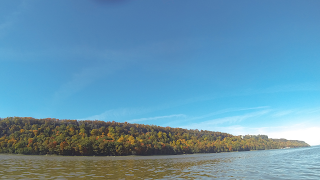 I decided ultimately on a short paddle, across to the Palisades, then north against current, then across to Spuyten Duvil, into the Harlem a bit, and then back. 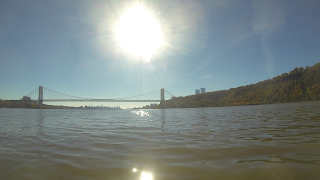 To the Cliffs
I set off to the Palisades, and ran a little experiment to see just how far south I would drift with the current if I kept my heading true. The results were not quite as dramatic as I expected, but I did drift about half a mile south in the fifteen minutes or so it took me to cross. There was a bit of extra drift as I waited for a powerboat to cross my path.

Closer to the New Jersey shore, I crossed and paddled close to the Adirondack, a sailing tour ship operated by Classic Harbor Line. the passengers took pictures of me as I took pictures of them. I gave chase, and I think with a bit of effort I would have at least kept pace. I didn't want to, however. I was right where I wanted to be: Ross Dock. 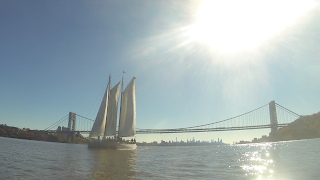 The Adirondack, George Washington Bridge in the background.

Ross Dock is a large, square park sticking out of the Palisades, just north of the George Washington Bridge. It's not a dock in a conventional sense: it's a park, a big square jetty sticking out form the Palisades. The river is quite shallow to the north and south, and at this extreme tide, mostly mud flat. I noodled around the nooks and crannies, waving at people looking over the wall, before I started paddling north. 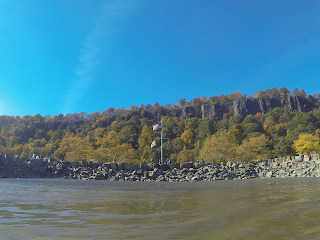 
To the North
As I paddled, I kept close to shore in order to fight as little current as possible, but not too close because it was quite shallow. Quartering waves, maybe two or three seconds apart, rolled in from the northeast. They weren't challenging, and I remember thinking I'd been in much bigger waves and conditions the weekend before, and I sort of went on autopilot.

That proved to be an embarrassing mistake. In short order the waves got a bit taller and stronger, and before I knew it was was washed up on the shore, alternately bracing into the waves and leaning towards the large pebbles of the glacial moraine that is, basically, the river valley. I may as well have put the boat up on blocks, not sitting in water of any depth, and the waves were too short to get enough flotation to push off.

Eventually, I pushed with my hand against a rock, feeling some strain as the wave pushed me in, and that dropped the stern just enough that I could push back into water. Up on the walking path, I saw a bit of relief from a man who seemed about ready to call 911. I wasn't in danger, merely inconvenienced, but I can see how the laity might not be able to distinguish between the two. 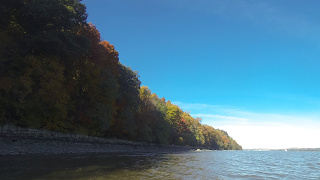 Back on course to the north.


Overhead, I saw a Coast Guard helicopter soar over the George Washington Bridge, dropping low, lower than the highest trees and buildings on the Manhattan side of the river. I wondered its mission; to fly so low was unusual, and I thought perhaps the worst, a person found in the water. I didn't seriously consider they'd be looking for me. The helicopter banked, crossed the river, and disappeared over the cliffs to the north.

I continued onwards. I soon came to Englewood Boat Basin, waving at people on shore and keeping a better distance from it. I paddled past the entrance to the little marina there, then found a little eddy to stay in while I finagled a snack our of my day hatch. 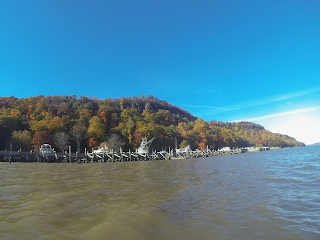 A fighter jet roared overhead, louder and lower than most planes. Suddenly, I heard its engines increase, and when I looked up again, I couldn't see the plane.


Return Crossing
At the north end of the boat basin, I found a little eddy to hang out in while I finangled a bit of snack and decided on my next move. I decided to take a long ferry glide over to Manhattan. 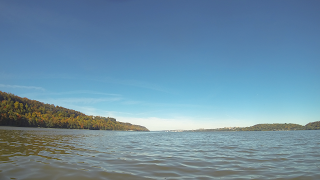 Normally, when kayakers talk about a ferry glide, it's in a whitewater or moving water context, maybe a few dozen yards. The Hudson River where I was paddling is just shy of a full nautical mile wide.

That said, I do what one would usually do: I picked two points in the distant, one closer that the other, and tried to keep them lined up. In this case, two water tower enclosures on different buildings in the Bronx.

At that distance, it's hard to see how fast you're moving compared to the shore, but once I was within a hundred yards or so of Manhattan, it was easy to see how quickly I'd drift south if I didn't take a pretty sharp angle. I speed up, kept my course true, and shortly arrived just south of Spuyten Duyvil.

I went through, and passed into the Harlem River.

The Harlem
The current was just beginning to change, and wasn't hard to paddle against. I went up past the Henry Hudson Bridge and took a poke at Muscota Marsh, part of Inwood Hill Park. 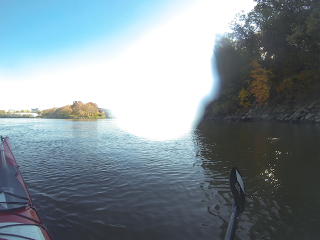 A poke at Muscota Marsh.

I went s bit further. At a low tide, the "marsh" is really a muddy flat, so I kept to the left and decided to see how far in I could get. I talked a bit with a woman walking her dog. 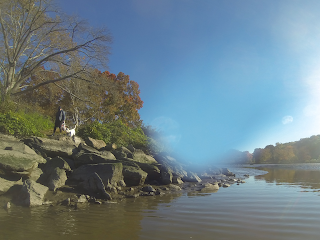 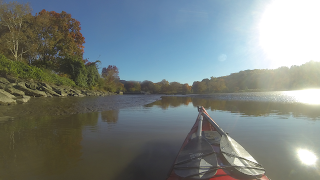 Looking in to Inwood Hill Park.

After that, I turned around, paddled back through Spuyten Duyvil, and then on down to the boathouse.


The Parting Shot
On the way back, I paddled up close to the Mon Lei, an old sailing boat that was bought by the owners of the restaurant La Marina (it's in the background). It's been moved recently, and later a friend of mine who's been working on restoring the ship posted a video of her being towed to her winter quarters.

The Mon Lei was once owned by Mr. Ripley of "Ripley's Believe It or Not" fame. 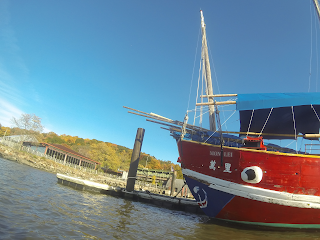 With that, my tour concluded. There was a lot I saw in just a couple of hours paddling - and altogether, I paddled maybe four or five nautical miles. See? Not all great trips have to be epic in duration or conditions.
Posted by jkmccoy at 3:30 PM No comments: