It isn't often that I get together a trip with people who have never paddled with each other before. This past Sunday, when I got my friends Kayak Dov, JJ, and TA together, it wasn't until we were on the water that I realized while they've all paddled several times with me, none of them had paddled with each other.

On the other hand, everyone kind of knew each other - JJ has blogged extensively, and Kayak Dov is an accomplished expeditioner with his own paddle blog as well. TA is fast becoming one of the more accomplished paddlers in the Inwood Canoe Club.

No strangers here, only friends who've not yet met, came to mind. 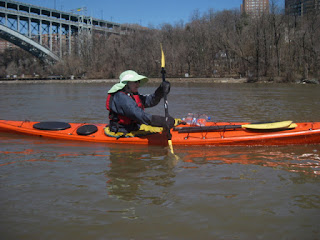 
We set off from the Inwood Canoe Club, our goal to arrive at Baretto Point in the Bronx. It was only two weeks ago that Kayak Dov and I cartopped there, and we saw a dolphin a bit further east. This time though, no cheating. We were going to paddle all the way there from our home base, and back.

The weather was nice, sunny and warm, though the water was still quite cold, in the lower 40s F. In the days before, we'd all discussed what we would bring or wear in anticipation of the cold - and then it wasn't especially cold at all. I wore my usual cold water layup (Kokatat BaseCore and OuterCore, with a heavy sweater), and while I was a little warm, I wasn't suffering for it, and comfortable when the wind picked up. 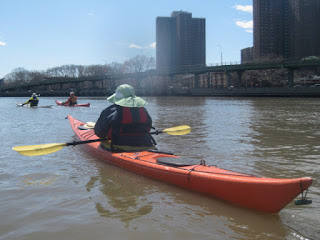 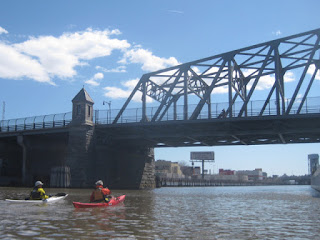 Passing under yet another bridge. 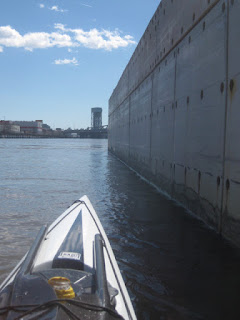 Playing peekaboo with the Pace.

The ride down the Harlem was familiar and uneventuful, and took much less time than expected - only an hour and a half. We cut through the Bronx Kill, pausing to take in the view and practice a little landmark-to-chart orienteering, before proceeding north in the main channel, looping between the Bronx and North Brother Island. 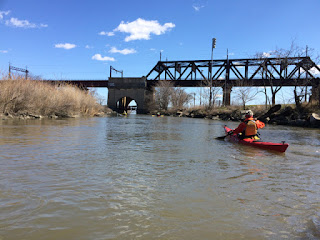 And right on out. Amtrak RR runs over this bridge. 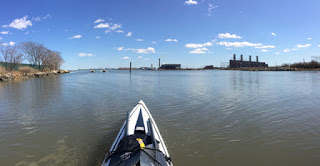 My favorite view in the city: looking East from the Bronx Kill. 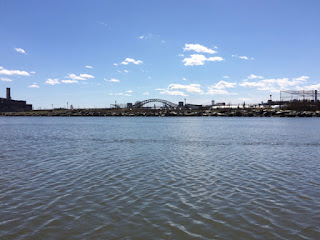 Looking to the right, the Hell Gate Bridge in the distance.


Here, I was able to regale fans who'd not previously heard my tour-guide spiel about North Brother Island. The highlights are captured in post I wrote about the first time I came out this way. 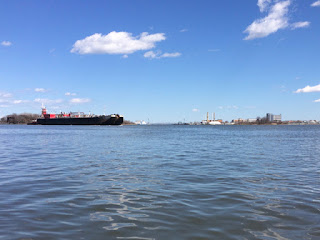 Barge headed south through the Gate.
North Brother Island just behind it.


As we curled around the channel, our destination was just out of sight, tucked behind a pier. The wind picked up and we were more exposed than we had been in the Harlem river, and in short order we were blown to the little cove, where we landed and said hello to the locals, who were out enjoying their park. 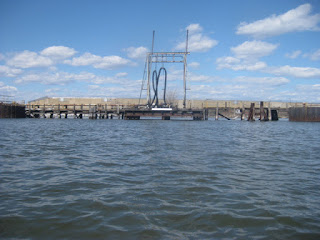 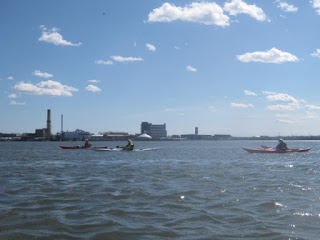 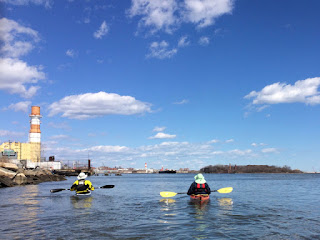 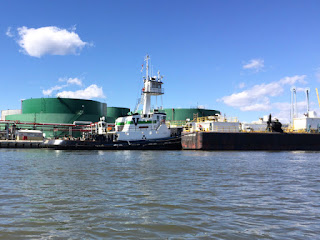 Passing a tug tied up.


Looking past across the water, we could make out the Manhattan skyline in the distance, the Empire State Building, Freedom Tower, the Hell Gate Railroad Bridge . . .and about half a dozen kayaks coming towards us. 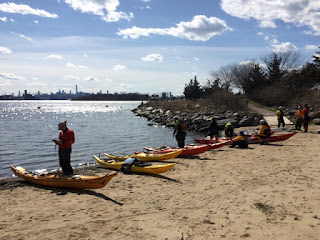 Who were they? We wondered about different groups, narrowing down who had the ability, equipment, and proximity to make this trip without having come the same way that we had. My guess was North Brooklyn Boat Club, located back in Newtown Creek. I was right.

Well, this was becoming one of the best kinds of paddles - meeting others on the water. Same passion, different path, so to speak. 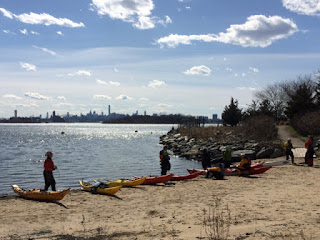 Baretto Point in the Bronx, Manhattan skyline in the distance.


I was a little surprised that there was hardly anyone in the group I knew. I recognized one woman, who'd come in as a customer while I was working at New York Kayak Company; I'd replaced a gasket or two on a drysuit. Everyone else was new to me though. They were a fun bunch, and there was sharing of tea and cookies, and comparing of paddling notes.

Shortly before we were going to leave, consensus grew to have the group depart as one big group - ten paddlers in all - and retrace our route back through the Bronx Kill. So, off we went, following some discussion between the leads of various groups.

"Hey, Julie, guess that makes you the trip leader!" Ho ho, ho ho no no no. Ten people is too many for one person to manage. I was up front and a bit of a "happy puppy" talking to people, but relied on the leads in the other group to keep eyes out, and most of my group had extensive shepherding experience. The only real clear direction I had to give was for one or two people to come in a bit from the channel to ensure a DEP ship that had cast off from a nearby dock had plenty of room to get through. 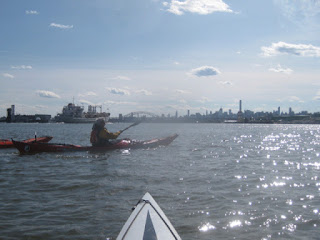 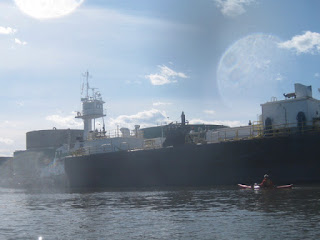 JJ checking out that barge up close.


Once we were in the kill, We pass through to the end - our timing was off for a whitewater feature that shows up. With a parting of the ways, our group headed north up the Harlem while our new friends headed south. 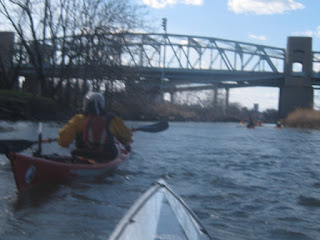 Ten paddlers through the kill.


We took our time heading back, partly because we had more wind against us than expected. The current grew in our favor as though, so it wasn't especially taxing. People sometimes get pie-eyed when I talk about paddling for two or three hours at a time, but with a group like this, we had plenty of conversation - telling old paddle stories, riffing on current events, remembering what parts of the river used to look like, and so on. 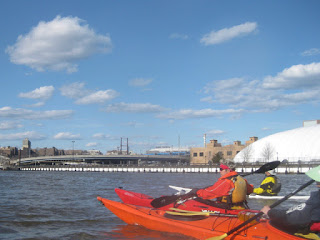 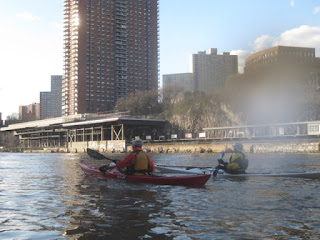 
So, it seemed that in no time, we were crawling back through Spuyten Duyvil, the Henry  Hudson bridge and Columbia C in plain sight, the Palisades in the distance. 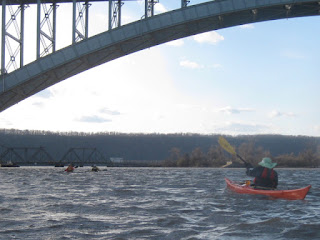 Passing under the Henry Hudson Bridge.

The water near the railroad bridge looked especially feisty, with confused seas sending brief spouts of water several feet in the air. I took a brief ride out there, in my newly acquired boat, a Tiderace Pace 18 (details to come). I found the Pace likes the rough stuff almost as much as the Gemini SP does!

Kayak Dov said his goodbyes and paddle over to his put-in in New Jersey. The rest of us headed back to Inwood, unpacked and cleaned our boats. We each talked about the amazing dinners we had prepared, well-deserved after such a robust paddle. 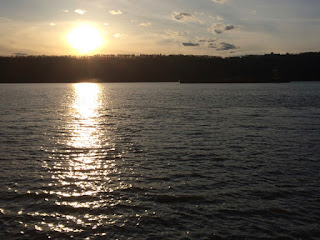 All's well at sundown! A barge passing as we packed.

And so came to an end, another pleasant day on the water.
Posted by jkmccoy at 6:16 PM No comments: