The first thing I feel is the impact of the water. If I'm perfectly lined up it's on my shoulder; if not, I take it on the cheek, cool brackish water slapping me in the face.

Then I'm under, and I feel my drysuit crinkle around me, air rushing to my arms and legs. I pull myself over and then sweep myself up.

Or, if I'm practicing re-entry and roll, I'm out of the boat, my feet in the cockpit while I sort my paddle, my legs inflated with whatever air was in the suit, and then I take a breath, stuff myself back in, assume the position, and roll on up. After than I'm sitting in six inches of water and wondering if I should even bother wringing my hair out.

At the shop, some of our students and other clients bought drysuits and have asked to continue paddling into the winter. So we've had a gradual introduction to drysuit paddling. For the record, the water temperature has been in the 50s Fahrenheit and dropping, yesterday 54 F.

Here are my observations.

Entering and Exiting the Suit: It's important to check and double-check all zippers; it isn't difficult to leave that last half inch open. Be sure to grab and hold open the gaskets and not just poke through them. Absolutely bilge the suit of internal air, not just before going out but every couple of hours if possible.

We had one student who, on a wet exit drill, could not get completely over because he had so much air in his suit. This made getting out of the boat difficult, flopping around like a fish until his legs were free.

Range of Motion: Drysuits allow for a range of motion, but do make the paddler bigger all around. I have to adjust my PFD sizing when I go to the drysuit, and I feel like I fill my boat more than I do in the summer, wearing only sandals and rash guards. I notice this the most getting in and out of the boat.

Temperature Management: This might be the biggest topic so I'll give it several grafs.

First of all drysuits keep you dry; they do not keep you warm. A drysuit is essentially a Ziploc bag shaped like a person, or a drybag for people. To stay warm, wear layers underneath.

One challenge in this part of the season, and in early spring, is that the air and water temperatures are very different: yesterday the water was in the 50s but the air was in the 30s, low forties by the time we were on the water. In the spring it's the opposite: the air warms up to the 60s but the water is still in the 50s, leading people to underestimate the potential risks.

On top of that, being on the water, and immersion in water, tends to be colder than street weather. Without protection, humans lost heat twenty-five times faster in water than in air. Even fully layered and in a drysuit, that water felt colder than the air did on land yesterday. Even out paddling, the proximity to water, with exposure to the wind, makes it feel colder.

Last weekend, one of the other students felt overheated as we talked through the float plan in the cozy confines of the classroom. He disappeared for a bit and, as we learned later, stripped down to his trunks. When he capsized later, he felt it. He was not in long enough for it to be debilitating but he was longing for his layers.

Second of all, drysuits work in both directions: as you paddle, you're going to sweat, and that sweat isn't going to leave the suit. So, however many layers you wear, you'll want to make sure you've got something that will carry that moisture out away from your body. Most athletic wear does this, and drysuit manufacturers have their own lines of products meant specifically for this in drysuits.

What you want to avoid is a scenario like the following: It's cold, so you dress warmly. You paddle for an hour, and then the day turns sunny. Now you're hot and sweaty and beginning to wonder if the drysuit was overkill. Then you stop for lunch, clouds obscure the sun, and now you're cold and clammy until you start paddling again.

Posted by jkmccoy at 7:26 PM No comments:

I sent an email to my club recently about cold water paddling. Given we're expecting a blast of cold this weekend, I figure I ought to cross-post here.

A lot of risks can be mitigated with a cautious float plan, gentle conditions, and going out in a group. Being able to self-rescue and rescue quickly help too.

You want to dress for the water, but be aware of what’s going on in the air as well. Once you’re wet, a steady breeze will chill you. Keep a paddling jacket handy just in case it gets wet and it’s windy.

Bring hot tea in a thermos that will keep it hot. Future you will thank present you. Hot chocolate is good too.

You lose body heat about 25x (twenty-five times) as fast in the water as you do in the air. So, if the water temperature if 56 degrees and it takes you two minutes to get back in your boat, imagine wearing what you are wearing if you stood outside for about an hour. Next, imagine being wet afterwards, losing heat at your normal rate.

Wear synthetic materials or wool. Wear layers. Start with something that will wick up sweat underneath, with additional material in the middle, and a windproof shell as your outermost layer. Bring spare clothes to change into later, either optionally or as necessary.

Drysuits keep you dry; they do not keep you warm. You will need to layer up underneath it just as you would for a walk in the park.

I get cold pretty easily so I end to progress sooner; your mileage may vary. I switch to a drysuit sooner because 1) I have one and 2) it simplifies everything.

The water temperature last night at Battery was 55 F. After Thanksgiving it will probably drop below 50F, then to the mid-thirties in January and February, and not above 50F until the very end of April. The anecdote is that there are more cold water incidents in April than any other month because the weather is nice, but the water is still crackin’ cold. Even in June it’s in the mid-sixties.

There is no reason to be afraid of cold water paddling. It’s quite nice and a nice contrast to summer. Safe paddling is all about risk management. Use your judgment, learn from others, and build experience.
Posted by jkmccoy at 3:23 PM No comments:

I was surprised when I read the email: Coach Gordon Brown will be visiting New York Kayak Company Saturday afternoon.

The best advice I've gotten is to work with as many coaches as possible, take what I like and leave the rest. That said, Gordon's pretty well known and highly regarded, running a shop on the Isle of Skye in Scotland. He coached a couple of my coaches, and has an excellent book and DVD series. If you're into sea kayaking, you've probably heard the name.

Several people showed up and we settled in to hear the great wisdom of this world-renowned instructor. The first thing we did was learn a little eskimo song and dance:

We gathered in a circle.
We learned the words, presumably in Inuit.
We hunched over and passed our hands from our knees, o our neighbor's, then back, then our other neighbor's.
Then we learned more words, repeated the motions, grabbing our nostrils and alternating left and right earlobes.
The we did it all again and adding some folding arm motions.
At the end, we jumped at the ceiling.

Wisdom received, we watched a slideshow about paddling in Scotland, and had some Q&A

One bit I was happy to hear about: how to encourage a student who has hit a plateau. This is an actual challenge I've been working on for about a month now. Gordon gave me something to try - more tools for my toolkit, as they say. We'll see how it works out. 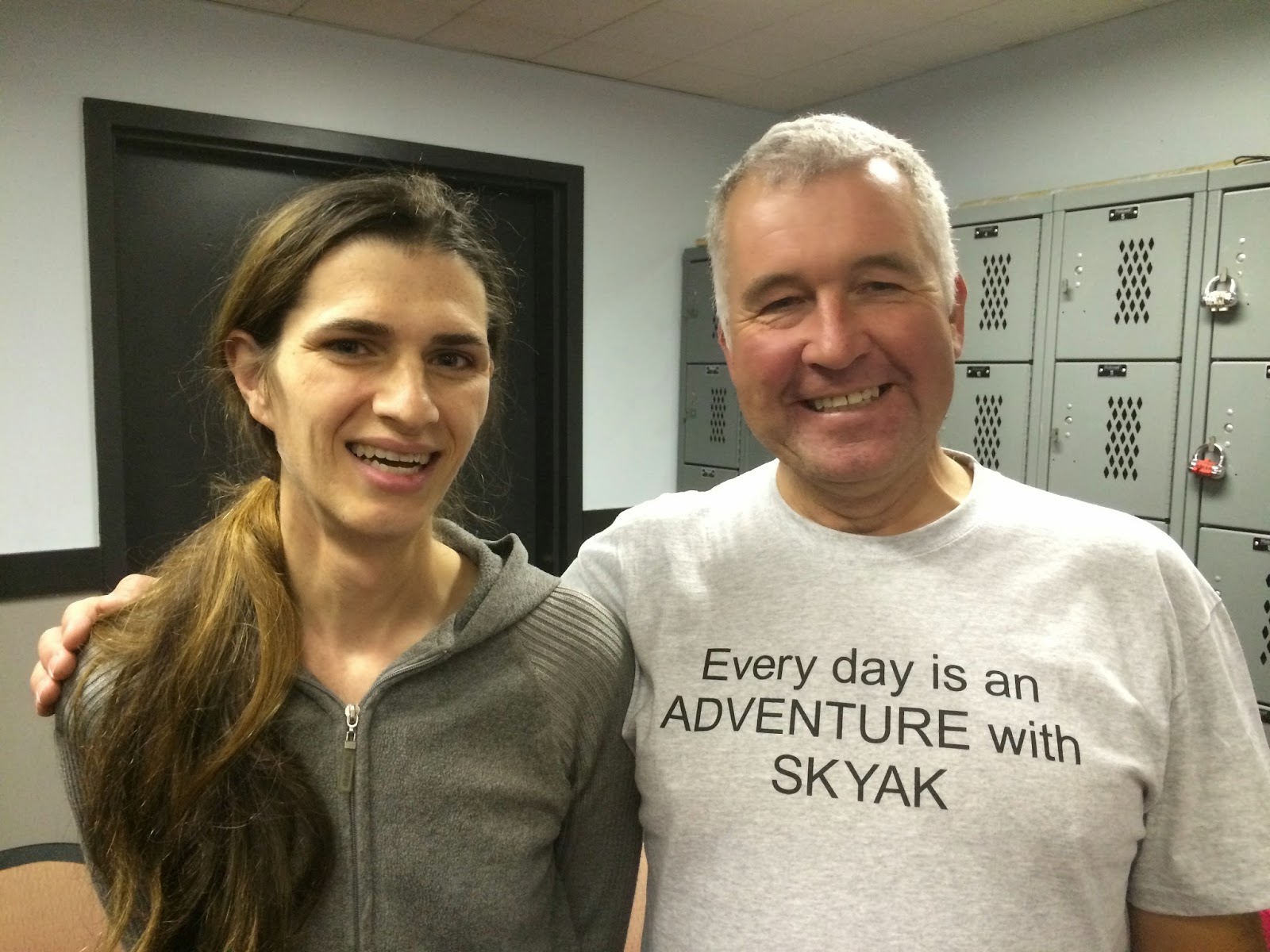 It was great fun, and the first time I've seen some of my paddling friends in months. As the winter months creep in, I'll be thinking of Scotland and, perhaps, one day paddling around some stacks and muirs myself.

Posted by jkmccoy at 4:42 AM No comments:

While things have slowed down a bit this month, the paddling season isn't over. I've had a couple of my regular 1-1 students out this month - in conditions that raised their cackles but ultimately gave them a bit of confidence. At least, I think that's what happened!

The past couple of weekends have featured a fair amount of wind coming from the west. On two separate occasions I took a student over the the Pier 26 embayment after a quick lap to ensure they were comfortable in the wind. Wind has a major effect on kayaks, generally catching the back and turning the boat towards the wind. So, for these students, having gotten good at turning the boat with sweeps and edging, this was an opportunity to practice the same when Mother Nature was being less agreeable.

They noticed that it was harder to turn away from the wind, but easier to turn to. When the wind picked up, or if ferry wake brought in higher waves, they got a chance to feel the boat broach a bit and either help or hurt their turning. This made for good fun on some of the edging practice too, though neither went in the water.

Posted by jkmccoy at 4:27 AM No comments: