"You're in a bad spot," came back the voice on the radio.

I was leading a couple of clients on a trip from Pier 40, home of the local shop I work at. We were coming back from Red Hook, Valentino Park, a small patch of beach directly across from the lower tip of Governors Island.

We were near a green buoy off the northwest edge of Governors Island, directly across from the Battery in Manhattan, keeping in place while we waited for this vessel (The J, I'll call her - anonymity so as to prevent an feuds). We were in a great spot. From our vantage we could make all the Statue of Liberty ferries, traffic coming out and in to the North (Hudson) river, round the bend from the East River, and the Staten Island ferry, which had just left Whitehall bound for its namesake destination. We could see everything and were ready to make the crossing - once the J moved out of our way.

"We'll be on the move once you clear us," I said over the radio. She had plenty of room, and we waved at her passengers as she passed, then surfed in her wake. She was basically a floating gin palace, taking afternoon partiers - a wedding party, by the looks - around the harbor.

Red Hook is a part of Brooklyn along the shore, immediately north of Bay Ridge. There are several new pocket parks along the waterfront. As economic development came to the neighborhood, the city put in these little parks. Valentino Park is a small one, perhaps sixty yards wide and bisected by a narrow pier for onlookers. Directly across the harbor is the Statue of Liberty, and views south generally afford the Verranzano Bridge. The towers of lower Manhattan, Wall Street, beckon to the north, just beyond Governors Island.

This was my first trip out here. I've only been deep in the harbor a few times. What happened was, wr had a couple of regulars hoping to just "go somewhere", and based on the timing I worked out some possibilities. Red Hook was a medium level - about 3 miles each way, crossing the high-traffic zone of New York's Battery, down along Governors Island, and then a short jot over. It was about the right challenge level for the clients, and also myself.

We paddled out with considerable ebb current in our favor. 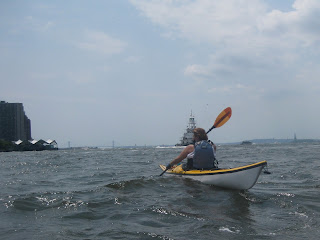 Out across the harbor. 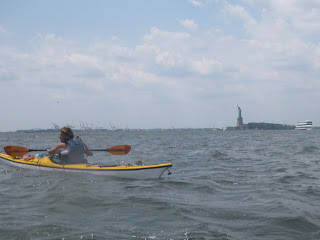 Along the way we overtook a group of four paddlers, basically from the other kayaking shop in Manhattan. There were two guides and two clients - one of whom was kinda slow, mostly due to poor form.

We kept together for the crossings. I coached their straggler a bit before handing him over to their guides. My clients were doing OK but I wanted to coach them on their strokes and talk through some chop we were going to pass through. The water along Governors Island gets rather shallow at low tide. 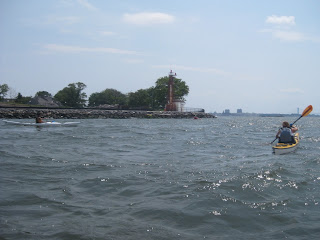 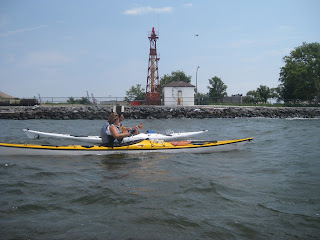 The beach we landed at hd a small public kayaking program in operation - mums and dads and their kids in sit-on-top boats. We landed in small swells of about a foot, then pulled our boats up the the side, to keep the beach clear. Then we had snacks.

One bit of advisory, overlooked by many paddlers. EAT! You're burning calories. Especially people who get cranky when they don't eat. You'll need the energy not just for the physical energy but the emotional and good decision-making energy.  You won't always have the cowgirl there to offer her spare Clif Bars, fruit, and other sundries. 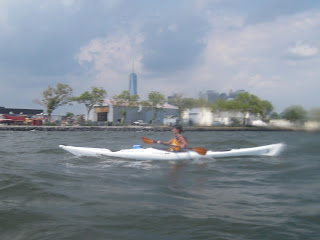 We rested nearly an hour, in which time we found a local Key Lime Pie shop, a motorcycle shop, and the loo (a porta-potty). Now, I've been to the Florida Keys many times and that is my benchmark for Key Lime Pie. I will have to return to this place to check them out. 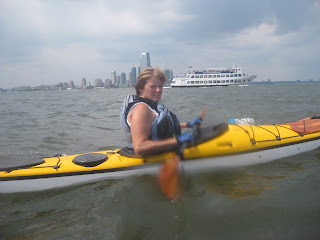 Snapshot on the return, near Governors Island.

The paddle back was remarkably easy - we had quite a lot of current with us, especially once clear of the Battery. Remember that "bad spot"? We did just fine. Once the J cleared, we paddled steadily towards the western edge of Battery, took a short break in South Cove, and then out into the current, easily past the ferry terminal at World Trade, and back home to Pier 40.

All in all it was a bonnie trip. What started as a hot day quickly cooled with winds from the south at 7-10 mph, against current giving us some playful wind-against current waves. The crossings at Battery tested my local knowledge of traffic - really, there are about three well-defined flight paths, and once you spot all the players you just have to keep track of them.

Some clouds rolled in and the wind subsided on the way back, so we did not have following seas as strong as expected - welcomed by my clients, though I was hoping to give them some top tips.

All three of us had had long days at work the whole week. This was a welcome respite from the vigors of "day jobs"!

Posted by jkmccoy at 6:10 PM No comments:

Rolling v. Not Having to Roll

A friend, fellow paddler, and L4 instructor dropped me a note recently. He's away on a trip using a borrowed boat, a Valley Aqunaut, which is the normal-sized version of my own Argonaut - the Argonaut is essentially the HV Aquanaut.

"Rolling this boat is no fun at all. Every time I have trouble capsizing I think of you."

This is because one fine day we were out practicing rolls and he coached me to get in a setup position and lean over till I went in.

I did not go in. I couldn't. The boat edged, sure, but would not capsize.

This come from someone who's a very good roller - forward, backwarrds, greenland or euro blade, hand rolls - he's very good.

As I've learned to roll, I've had to learn to really throw my weight over the side, and often carve my way into the water using my blade - rolling the boat in, more or less, before I can practice rolling up.

It's nice to know I've learned to roll a boat that's a bit of a challenge to rolled.

Email ThisBlogThis!Share to TwitterShare to FacebookShare to Pinterest
Labels: rolling

One of the reasons I wanted to return to Maine was the array of challenging conditions in close proximity to each other. From the camp were easy paddles to a nice tiderace, multiple eddies to work with, and islands and channels for navigation. Add in some cartopping and there was rock-hopping, surfing, and choppy conditions. We did a little of each, a couple every day.

For example, when practicing some trip leading, we found some nice little arrangements of rocks to paddle over. The trip leader had to scope it out the path, then give simple instruction and shepherd us through. This we an elbow-shaped loop behind a rock. We each went through, twice, and on the last go, the paddler capsized (on purpose, for practice). The trip leader had to rescue him.

Another scenario had us landing in surf. Not "surf landing", but landing in surf. This was novel to the Cowgirl. The idea was to approach the beach in a controlled manner, rather than riding a wave to be deposited on the beach. Well,the surf reflexes of yours truly meant that she kept paddling forward in the trough to catch a wave. In so doing, her boat broached on the wave, yawing about sixty degrees, and she capsized in about a foot of water.

What was meant to happen, and which was eventually attempted, was to paddle backwards in the "big suck" of water rushing back from the beach. This gave the boat momentum into the next wave approached from behind, making it more stable, and then paddling forward to get closer to the beach. In this manner, a successful landing was obtained.

We also did a fair amount of cliff surfing - as water rushes past cliffs, a little wave can push along but not into a cliff. That was a neat way to paddle - catch a wave but don't hit that wall!

The local tiderace was something we didn't get to until the very last morning, and it was an early one at that. To get the tides right, we had to be on the water and 0500! It was worthwhile though. There's a spot, called Lower Hell Gate, where the river kinda makes a little jog to the side, with a long slope narrowing down to a point at the water. There's an eddy to shelter in and a prime viewing spot for an instructor to do some land-based coaching. 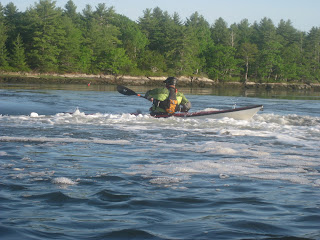 
Last year, I capsized here once. I wanted a rematch. While the tide was a bit higher and I didn't try side-surfing, I did managed to keep in the stream and practice moving from side to side, saw my bow drive into the standing wave, and then back out with the current. It felt great. I then crossed the river and practiced moving sideways in an out of eddies.

The area of Knubble Bay, the Kennebec and Sheepscot rivers near Bath, are great an varied placed to practice sea kayaking. I fully intend to return.
Posted by jkmccoy at 12:46 PM No comments: