I was very happy to attend the Midcoast Sea Kayak Rendezvous in Georgetown, ME, this year. Hosted by John Carmody, the Rendezvous brings together top coaches from all over the sea kayaking world, with dozens of attendees sorted into groups who rotate through sets of coaches each day. I've been to the area several times, and this was only my second visit to the Rendezvous, and I had a blast. For bonus fun, Mister Cowgirl came along, and got to fine-tune some of his sea skills.

In my pod were some familiar faces, mostly chaps who completed or were working towards their Four Stars: Bruce, David, Mike, and some new faces.

The biggest challenge was the overall weather. It was too nice! Sunny, winds F2-F3, long period swell. For paddlers looking to challenge themselves in conditions, it was a bit too easy!

I didn't take many photos, and none from being on the water. I'm trying to keep my deck clear and streamline my kit, so cameras take a low priority.

First of all, there was the road trip. 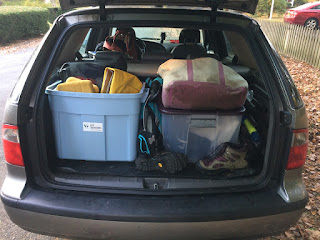 The Saab is loaded. 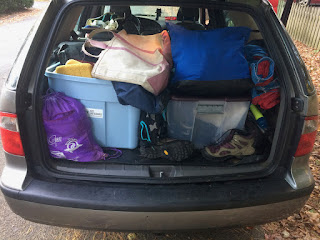 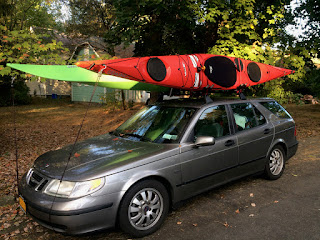 COLREGS-Compliant: Red on Right is Wrong. 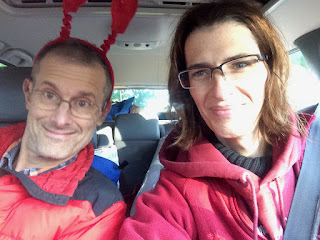 Bundled up for an early start.

We picked up Jean, of Two Geeks Three Knots. her boat was coming on another friend's car, but that friend was delayed enough that she'd be getting in late. 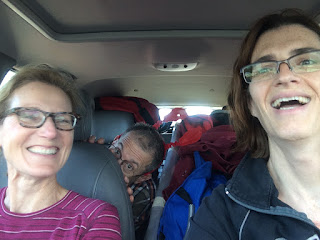 There's a lobster hiding in the back! 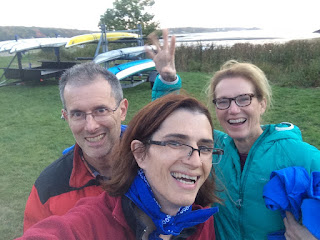 Arrived and Registered in Sagadahoc Bay!
THE HOUSE
We'd gotten a late start on reserving camping at the campgrounds, which were full. Fortunately, the daughter of one of the owners had a house nearby, and was willing to rent it out. It was a little complex, with some people arriving later and staying later, thanks to Bea for getting it all sorted - we stay in a house, with heat, and hot showers.

One of our housemates was a T, a lanky fellow from the UK by way of Montreal. Turns out a New Yorker had sized him for a greenland paddle, and I was the paddle mule. 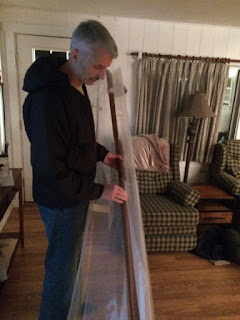 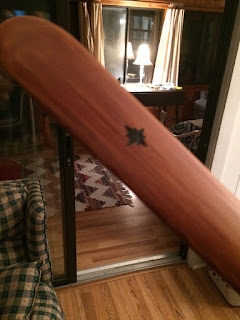 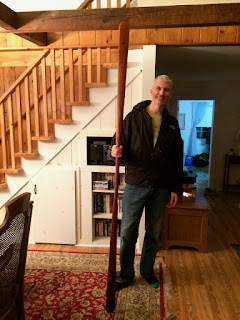 At one point I had that thing on the subway, and had to lean it at about a 70 degree tilt just to clear the ceiling. I gave up and ended up taking a cab. T brought genuine Canadian Maple Syrup and popcorn as a thank-you, though! Werf it.

The next day, we sorted into our groups, by color. Mister Cowgirl was in the Purple Group. 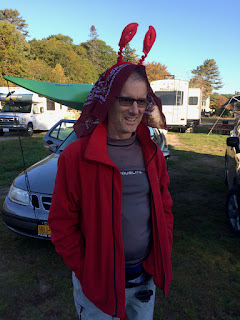 DAY 1
A bit of surf with Nigel Robinson, Jerry Polinsky, and Russel Farrow. We set out from Sagadahoc Bay warming up, estimating distance and time to paddle it, and then paddling west towards Popham Beach, where the Kennebec River meets the sea.

At the mouth of the river are a couple of large rock islands, and a bend in the river the results in a pretty stiff tiderace. We ferried over to one of the rocks and then spent some time in a wee tiderace, current carrying us NW. Eventually, we backed off of that, ferried over to a large green buoy, and then surveyed the surf along Popham. 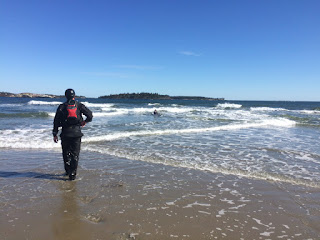 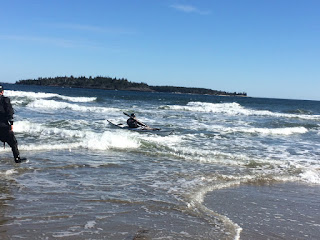 It was  . . .interesting, and a challenging read. For one thing, the inbound current was flowing north-ish, almost parallel to the beach, but the ocean swell was coming in from the SE. On a chart, it was clear that there was a long, low sandbank, and as the swell hit that, it would turn and roll in at a complementary angle to the primary surf. Additionally, the transition to that long low back was abrupt. 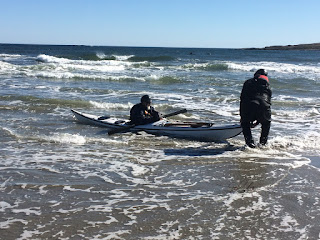 The result was somewhat messy but organized. Waves would form and break pretty far out, then hurtle in towards the beach. Waves came from two different directions, converging like a pair of scissors at one spot on the beach. The current would move us sideways as we waited, and a bit while surfing in, left to right as we faced the beach.

So - eight ball in the corner pocket time. And I gotta say, I nailed it, starting my line to the left, surfing in, backing off, then catching a complementary wave from the ride, landing on a nice, chill patch of sandy beach. 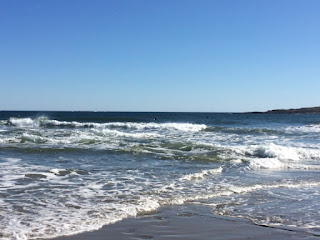 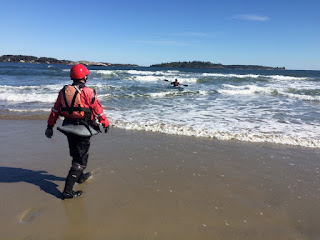 Later on, as we rode in the waves, there was one surprising bit of swell that picked me up and ran me in. I braced for what seemed like forever, then tried coming off too soon and capsized. I whiffed on my roll but found I was shallow enough to quickly pole up and paddle back out.

Later, when we relaunched from the beach for lunch, I felt a *POP* and my backband gave way. I paddled out past the surf zone - our given exercise was to stay and paddle in the surf zone - and saw that an 1"x 1" panel of plastic had sheared out of my seat bucket, including the part where the bolt goes in. While I managed to fix this with zip ties, this issue haunted me the rest of the weekend. 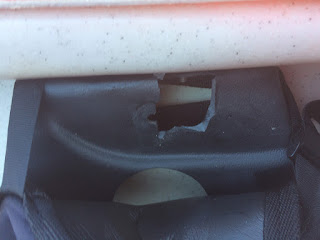 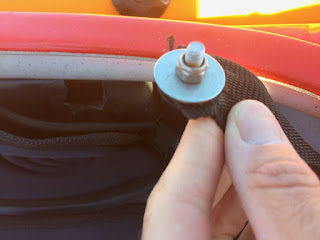 Bolt and washer, still in place.

After our surf session, we paddled back to camp, arriving with enough water left to paddle in. Sagadahoc Bay gets awfully muddy on a lower tide level.


DAY 2
Our second day paired us up with Steve Maynard and Caroline Zeiss. Early on, rumors were buzzing and turned out to be true. We were paddling out to Seguin Island!

Seguin Island is about four nautical miles south of our campground, a large set of rocky cliffs with but a single sheltered area to land. There's a lighthouse on the top, and a small, defunct boathouse near the landing. It's a proper journey, with a lengthy open crossing, as well as some ledges along the way to play with and navigate against. 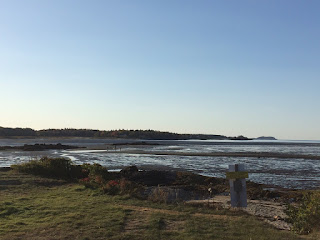 Challenge #1: Waiting for the tide to come in.


We paddled out, playing a game of, basically, leap frog, to keep in position and warm up a bit. As we approached Seguin, we veered right in order to circumnavigate it counter-clockwise, playing aginst some features along the way. However, rather than staying and playing, we just played and kept moving, on and on around the island, then back a ways, then back on our original course, eventually rounding the final bend to land in the sheltered nook below the light. 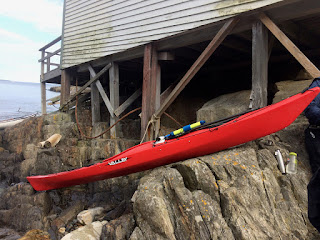 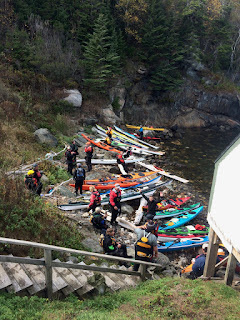 Behind the defunct lighthouse was a long, long, long wooden track leading up to the lighthouse. After lunch, I walked up the entire length, noting the wobbly and loose boards before realizing, at the top, the the track was closed, and we were supposed to be walking up a path just below it. By this point, it was almost time to leave, so I took a couple of pictures, turned around, and left. 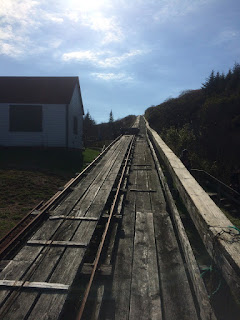 A long climb up. 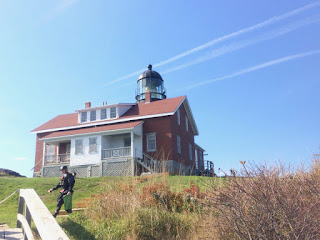 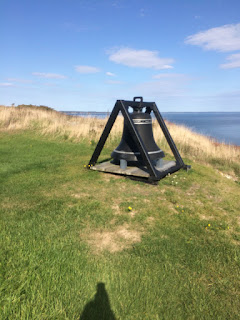 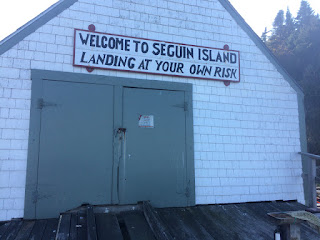 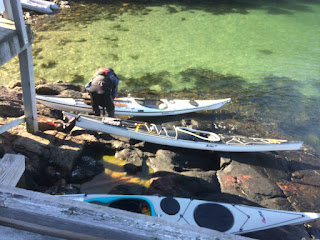 The journey back was pleasant and uneventful. As we approached Sagadahoc Bay, we realized the tide was dropping, and if we lingered too long we'd be caught out in the mud. We managed to get off in time, and debriefed in a little gazebo overlooking the bay - whereafter we spotted the other groups coming in, and we started to wonder who would make it in before the tide ran out.

Sure enough, a few didn't quite make it. 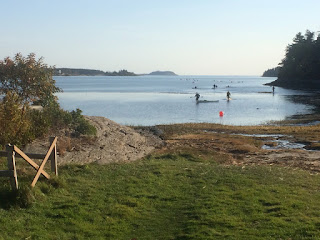 DAY 3
The third day was our short day, as everyone would want to be off in time to clean up, pack up, and start long drives home. We were paired with Andrea Knepper, Kevin Beckwith, and John Ozard. I've met Andrea before, and paddled with John, but Kevin was a new acquaintance.

The tidal situation was such that there wasn't much to play with. High tide was in the early afternoon, which meant that at most we'd catch the back half of the flood cycle and be off shortly after. The weather was similarly benign - there weren't big Low pressure systems kicking up shorter period waves offshore. We were challenged to find something close and interesting.

We set out from Reid State Park, and basically played around some rocky features - first, Griffith's Head, then up along the coast. I practiced paddling as close to the shoreline as I could, and sure enough a large swell, about my height came along broadside. I braced into it but capsized; I think what must have happened was, as I was alongside a sloping rock, and as the wave hit me it also lifted and dissipated, so I lost my support.

I ended up in a position to roll up on my weaker side, but I though for a moment and thought 1) that's my weaker side, but also 2) I'd be swinging into rocks and, I think, coming up against the next waves. Thus, I swung around and rolled up on my strong side, positioned to brace into the next oncoming wave, which wasn't necessary.

More than one person later remarked that my practice roll looked pretty good. Was it intentional? "Well, the recovery was intentional, that's for sure," I said.

Somewhere in all of this, that pesky backband gave way again. The zip ties that I'd used to secure the band to the pillar had broken use, and Kevin had us try a repair at sea. now, in hindsight, we futzed around with it longer than necessary, but ultimately it took one coach supporting my boat while I sat on my back deck to get better access to the operating theater - it's hard to work on something immediately next to your waist.

I am adding zip ties to my small repair kit. I've been so focused on patching holds and snapped paddles that it never occurred to me to need fasteners.Maybe some paracord too.